I am grateful to Philip Bliss in Melbourne for alerting me to this breaking news.  (I had only received a headline alert as of this morning.)


The major Israeli daily, Haaretz published two articles in the last 24 hours on Yad Vashem, the national Holocaust Memorial and Museum in Jerusalem.  Since 2007 there has been a diplomatic push to have the text below the picture of Pius XII changed.  I saw the image of Pius and the text when I visited Yad Vashem in 2009 as part of the International Symposium on Pius XII and the Holocaust.  I remember standing before the image and text and thinking that it was a   very blunt, but also thinking that it could only be changed if there was a greater study done on the man and his times.  This is what has happened.


I applaud Yad Vashem for continuing to undertake serious historical study on the role of Pope Pius XII in collaboration with historians around the world in order to reach an historically satisfying position.  The journey is not over, but the changing of the text points to the slow process that historians engage in and to the high value placed on historical honesty over ideology and polemic.  There will be people who will say the changes are not warranted or that they are insufficient; and they are entitled to their opinion. However, history deals with the truth of the past, not wish lists or imagined and hypothetical cases.  The text under Pius' portrait may change again when the archives for the war years are opened.  In the meantime, we will continue to research, read and study.  This is a wonderful example of historians at their best. 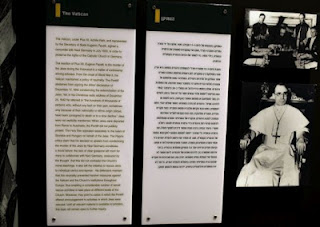 The 2007 image of Pius and accompanying text.


Yad Vashem is due to unveil a new wall text on Sunday describing the
actions of Pope Pius XII during World War II, softening a previous
message which stated that the head of the Catholic Church had not
protested verbally or in writing to the murder of Jews by the Nazis.

The initial wall text sparked a diplomatic incident in 2007. The new
wall text still blames Pius XII for the fact that the Church did not
intervene on the Jews˙s behalf at the time. But it paints a more complex
picture of his conduct and contains veiled criticism of the Vatican for
refusing to open its archive to allow historians to scrutinize the
actions of the Holy See during the war.

In April 2007, the papal nuncio to Israel, Antonio Franco, refused to
take part in the Holocaust Remembrance Day ceremony because of the wall
text, installed when the new Yad Vashem Holocaust History Museum opened
in 2007. Yad Vashem said the wall text would be changed only if the
Vatican opened its archive to researchers, and if subsequent research
revealed new information about the actions of the Holy See during the
war. Franco did eventually attend the ceremony.

The old wall text, entitled "Pope Pius XII and the Holocaust", read:
"Pius XII˙s reaction to the murder of the Jews during the Holocaust is a
matter of controversy. In 1933, when he was Secretary of the Vatican
State, he was active in obtaining a Concordat with the German regime to
preserve the Church˙s rights in Germany, even if this meant recognizing
the Nazi racist regime. When he was elected Pope in 1939, he shelved a
letter against racism and anti-Semitism that his predecessor had
prepared. Even when reports about the murder of Jews reached the
Vatican, the Pope did not protest either verbally or in writing.

"In December 1942, he abstained from signing the Allied declaration
condemning the extermination of the Jews. When Jews were deported from
Rome to Auschwitz, the Pope did not intervene. The Pope maintained his
neutral position throughout the war, with the exception of appeals to
the rulers of Hungary and Slovakia toward its end. His silence and the
absence of guidelines obliged Churchmen throughout Europe to decide on
their own how to react."

The new wall text is headed: "The Vatican and the Holocaust." It notes
that it was Pius XII˙s predecessor, Pius XI, who signed the Concordat
with Nazi Germany. It reiterates the fact that Pius XII did not sign the
Allied declaration but mentions that a few days later, during a
Christmas radio broadcast, the Pope mentioned "the hundreds of thousands
of persons who without any fault on their part, sometimes only because
of their nationality or ethnic origin have been consigned to death or
slow decline." The wall text notes that Pius XII did not mention the
Jews specifically.

The new wall text also mentions the Pope˙s nonintervention during the
deportation of the Jews of Rome to Auschwitz in contrast to his appeal
for the Jews of Hungary and Slovakia, and uses the term "moral failure"‚
which the previous wall text did not.

"The Pope˙s critics claim that his decision to abstain from condemning
the murder of the Jews by Nazi Germany constitutes a moral failure: the
lack of clear guidance left room for many to collaborate with Nazi
Germany, reassured by the thought that this did not contradict the
Church˙s moral teachings, it reads.


"It also left the initiative to rescue Jews to individual clerics and
laymen. His defenders maintain that this neutrality prevented harsher
measures against the Vatican and the Church˙s institutions throughout
Europe, thus enabling a considerable number of secret rescue activities
to take place at different levels of the Church.

Moreover, they point to cases in which the Pontiff offered encouragement
to activities in which Jews were rescued. Until all relevant material is
available to scholars, this topic will remain open to further inquiry",
the wall text concludes.

"In my opinion, the connection between the Vatican and rescue activities
remains to be proven. I do not see that this has been proven yet", said
Prof. Dan Michman, director of Yad Vashem˙s International School for
Holocaust Studies. Yad Vashem added there had been no negotiation or
coordination with the Vatican regarding the wording of the wall text.

Michman said the wall text was changed in response to additional
research after the Vatican allowed scholars to examine documents dating
up to 1939, and in response to questions by visitors to the museum. 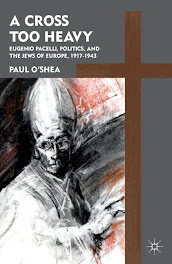